Is your technology vendor dying?

For decades, the prevailing model was to charge for upfront license fees coupled with high margin maintenance fees. In many cases, as much as 90% of the entire system was paid for before the newspaper even went live.

Today, the ever-increasing interest in SaaS and cloud-based solutions is causing huge cracks in that licensing model and the results are not going to be pretty.

Newspaper publishers have often asked “are you still going to be in business 5 years from now”. Then, when in doubt, they selected systems from traditional companies, companies that had already been around for years. The underlying assumption being of course “they’ve done OK so far, we can assume they will continue”. Continuing to make this assumption may be a big mistake.

To really understand the forces at play here, let’s take a look at a hypothetical company called News Systems Inc (or NSI for short).

NSI supplies news and content management systems to publishers and has had a “traditional” licensing model.

NSI typically sells 12 systems a year, each costing, say, $1 million. Their terms are such that 90% of the system is paid for before the publisher goes live. After go-live, the new customers are charged 15% maintenance and support. This may sound very familiar to you.

Simplistically speaking, NSI’s annual revenue is therefore $12 million, plus the income they derive from maintenance and support contracts from their existing customers. As they are consistently making sales they are adding $1.8 million (12 new systems @ 15%) to their recurring income year after year. They are growing steadily and are a healthy company. Publishers feel "safe" and are keen to purchase a system from them.

Their prospects no longer want to pay license fees prior to going live, they want a system in the cloud and want to pay annually.

NSI, being a sensibly run outfit, listens to their market and starts offering cloud solutions. They charge a setup fee of $200k and then charge $200k per year to run the system. They still sell 12 systems per year and customers rave about the cloud-based solutions and how it is benefitting their publishing business.

Twelve months later, NSI announces massive layoffs and closes many of its offices. Six months after that, they close their doors for good.

What happened?
The issue is that NSI’s entire cost structure is built on the premise of hefty upfront license fees and a high margin support and maintenance stream. It is baked into their corporate DNA, it is how they function. Changing that is hard if not impossible.

Let’s take a look at what the transition to a cloud company really means for their business. In doing so, let’s assume the following is true:

They sell 12 systems per year with a 15% support/maintenance fee.
They move to a cloud offering of the same system and charge $200,000 per year with a one-off $200,000 setup fee.
The annual licensing fee includes support and maintenance.
To keep things simple, we shall ignore the subtleties of “how long it takes to install” and “when do the support fees kick in”. Let’s just assume that in year one NSI makes $12 million. In year two, they make $12 million plus $1.8 million for support from the customers they signed up the first year. In year three they make the same $12 million, plus $1.8 million plus another $1.8 million support fee. This continues year after year.

Now let’s compare this to what their income would look like had they transitioned to offer cloud-based systems. Again, keeping things simple for the sake of this model, the first year they earn 12 x $200,000 for the setup plus 12 X $200,000 for the first year license fee (in reality they earn even less as not all systems are sold and installed in the first month, but again, we’re keeping things simple here). The second year, NSI gets 12 x $200,000 from the first set of could customers, plus they sign up 12 more. This continues year after year.

The result is shown in the following chart: 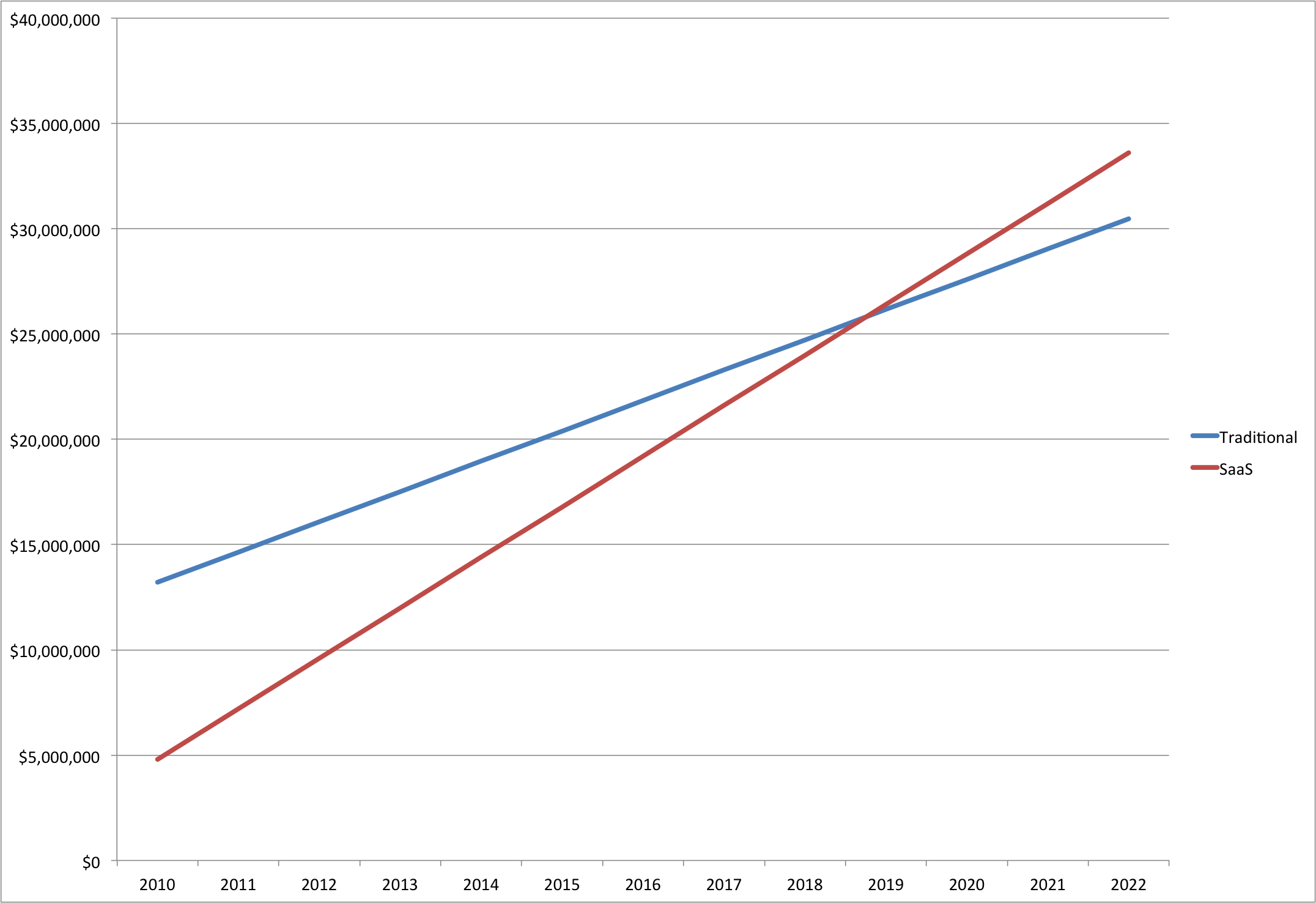 We now instantly see the major problems this company is facing.

In the first year, their revenue drops from $13.8 million to $4.8 million, about a third of the original.
Over night, this healthy, growing company has hit a wall with plunging revenues. It takes them about four and a half years just to get back to the level they were on and it takes almost 9 years before their new business model overtakes the old one.

This simple model clearly illustrates why your favorite technology provider may be plunging into disarray even while selling the same number of systems as ever before.

As stated earlier, some major traditional players have already started to show signs of this. A few months ago one of them shed about 30% of their workforce and, more recently, another closed the door on their international offices and shed further staff in the US. All in the light of trying to transition into a cloud company.

Why is Miles 33 different?

Back in 1999, Miles 33 adopted an Annual License Fee model (or ALF for short), pioneering the concept well before cloud-deployed systems were common. That is over 14 years ago!

Today, virtually all of Miles 33 customers pay for their system on an annual basis and Miles 33’s cost structure no longer relies on these large up-front license fees.

As the earlier chart clearly shows, it takes almost 9 years before the ALF model becomes a stronger business model. Today, after 14 years, Miles 33 has well surpassed that point and may very well now be the healthiest publishing system vendor on the planet!

The Miles 33 ALF is unique in the sense it can be used for on-premise as well as cloud-based installations. To Miles 33, the concept is the same, you pay for your software “as you use it” – a true “Software as a Service” model - And you don’t pay ANY license fees until the system goes live, firmly placing all the risk on Miles 33 and in stark contrast with the “traditional” model that requires licenses to be paid up front.

The system is also extremely flexible. If business grows and you need to “use it more”, you can increase the license at any time. Likewise, if your business slows and you “use it less”, you can decrease the annual fee.

Our customers do not pay for upgrades as that is included in with the ALF. We are proud to make the claim that virtually all of our customers run the latest versions of our systems. This of course makes support much more efficient for us and that is a benefit to our customers.

Thanks to the ALF model adopted so many years ago, Miles 33 has been able to grow its customer base and invest heavily in R & D in a period where our competitors have been shrinking. Furthermore, Miles 33 has also expanded its product portfolio and global presence with additional office locations around the world through the acquisitions of companies like Televisual, Datamatix, net-linx and more recently Tera Digital Publishing.

These are trying times, for everyone in the news publishing business and now, more then ever, publishers need to make sure their system vendor of choice will be around for years to come.